Luigi is a character appearing in the game Super Luigi 64, as well as many other ones. He is also Waluigi's cousin and the older brother of Mario.

He is a main character in Luigi and the Water of Doom: the Great Ocean Adventure!.

Luigi was born in Brooklyn, along with his older brother Mario. One day, Luigi accidentally spilled spaghetti on Mario's pants, which started his addiction to pasta. One day during their childhood, a strange creature named Parax took a DNA sample from Mario and transformed into what he would look like in his adulthood. Luigi never knew what happened because he was busy cowering behind a garbage can. It wasn't until twelve years later during Luigi's years at college that he discovered what happened. He also is in love with Daisy, and he wishes to marry her. Luigi also has a good friendship with Princess Marana.

Luigi is the assistant of Mario when saving Princess Peach or Princess Daisy. When Mario is in trouble, he will fight off whatever Mario is having trouble with, so Mario can go save Peach. If it's Daisy, Mario will better deal with it himself, so Luigi can rescue Daisy.

Other than that, Luigi is an experienced kart racer and has raced against his rivals and friends in many closed courses around Mushroom Kingdom. He once had a job in exterminating ghosts in a mansion, but never went back to it again. He was also Dimentio's minion, Mr. L, twice.

Luigi appears in Super Mario Moose as a main and playable character. He is available from the start.

Luigi appears in Bowser's Story as a boss.

Luigi appears in Mario All-Star Sluggers as a team captain. When chosen, his team is called the Luigi Ghosts. His stats are:

His All-Star moves are:

In Flappy Swooper, Luigi appears as the third boss in Story Mode. His attacks include pulling Swoop closer with his ghost vaccum, shooting fireballs, stomping, and using the Green Missile.

Luigi appears in Ghost Rage as the main hero and playable character. In this game, he gets sucked into a ghost dimension ruled by King Boo and decides he has to stop it.

Luigi appears in Super Mario Smash as a playable character. His moveset is nearly the same as in Super Smash Bros. for Nintendo 3DS/Wii U.

Luigi will appear in Donkey Kong: Revive as a playable character. He teams up with Mario and Peach, and Yoshi to save Pauline from Donkey Kong.

Luigi appears as a playable fighter in Mario Smashers.

Template:InfoboxLuigi replaces Ninetales in this hack. He is a dual-type Normal/Electric MarioMon that evolves from Baby Luigi starting at level 37.

In the first game, Luigi, now as Mr. L, has to team up with other members of Star Hedgehog and even, AJ. In the second game, Mr. L is a leader of Star Hedgehog Cadets team with Tails, Blue Toad and AJ.

Luigi with his ghost vacuum. 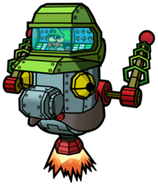 Add a photo to this gallery
Retrieved from "https://mariofanon.fandom.com/wiki/Luigi?oldid=41414"
Community content is available under CC-BY-SA unless otherwise noted.