This article belongs to Parax.. Please ask them before editing the article. If you do so without asking, or if the owner says no, you will get a warning. If you continue, you will be blocked.

Parax is a Shadow Demon who normally appears as a dark "clone" of Mario.

He was born at the beginning of time, as well as his cousins Shade Link and Arcsteilius. Ironically, despite him and Arcsteilius being Demons, they are not evil. When he met Mario, he told him he meant him no harm, and approached the boy. He took a sample of Mario's DNA, and left. He mixed it with himself, and developed an optional, secondary form - Dark Mario, a taller, more agile, muscular-ish, and thin version of what Mario would look like as an adult. His true form is a black humanoid, thin and bony creature with eyes that change colors between gold and red, depending on his mood, as well as a dark, hooded robe.

Parax used his powers to take the form of a pale human in black clothes and black hair, and red iris'. He went to college, and was Mario's roommate. After 2 years of college, Parax arranged a meeting with Mario in their room. He trusted Mario enough not to tell anyone his secret, and was about to reveal his true form, but an assassin (who was hired after one of Parax's enemies found out his identity), who was in another building, shot him with a poison dart. The assassin tried to flee the scene, but Mario chased him. Parax was already partly in his true form where he was hit, making him immortal there, allowing him to survive. He instead chose his Dark Mario form, left the room, and chased the assassin. He pulled the spike from his back, and a gun formed around it. He fired, and it flew out a window, rebounded off of some type of energy that Parax set up, and went through a different window, hitting the assassin's leg. Parax caught up to him, and threw him out a window. He showed Mario his true form as well, then went through two more years of college.

After college, he moved in with Mario, Luigi, Peach, the original Toad and people to Peach's castle. When he saw it, he said it looked so familiar (he helped defeat a powerful wraith at Peach's castle thousands of years before the events of the Mario series).

When he entered, he was in his Dark Mario form. Mario knew he was Parax and welcomed him. Parax created a secret series of rooms, all connected to each other, which would be his main home in the castle. He later showed Mario his true form. Mario, experiencing childhood flashbacks said that he knew him, and before he could say anything, Parax spoke. With Parax's voice and his true form shone, Mario knew he met him long ago. Parax reverted back to his Dark Mario form, and went into his room. Later, he and the Mario Brothers were downstairs in the Lobby;Parax was studying an artifact he got from a tribe who mistook him for a god (he offered food and saved them from the terror of the island, though he wasn't attempting to impersonate a god), Luigi was helping Parax study it because he was promised half of Parax's profits when he goes back, and Mario, just simply walking around, thinking about what to do. They heard a loud, banging noise, but Luigi and Parax were too busy to do anything. Mario, having nothing to do, went upstairs, and met Plasmius, and accidentally freed him. Parax had decided something bad was going on upstairs, and was able to save Mario and stop Plasmius, who escaped. Parax had to hold in all his anger to prevent himself from going on a deadly rampage, but still had to chew Mario out about not freeing ghosts if they look like they want to eat him. Parax later joined the Shadow Army, so he was at the Castle very rarely. He was the best soldier in the army, but he despised training, because it was so easy. Due to how strong he is, he often says, "And that is why I wasn't allowed in the Smash Series", after gruesome fights. After years of service, Parax left the Shadow Army, because of the annoying daily "training", and that Peach's Castle was almost destroyed at one point by an angered Plasmius, who had kidnapped Peach in an (failed) attempt to start a ritual to be revived. Parax arrived in the nick of time and gave Mario all of his power, thus powering him up. Mario transformed into his ultimate form, Omega Mario (credit goes to Youtuber ACDCGAMER), and blasted Plasmius out into space.

Temporary Rivalry with the Mario Bros.[]

One day, Mario was walking around outside the castle. He eventually found a black crystal glowing with the colors of blue and red sticking out of the ground. He picked it up, and decided to ask Toad about it. Toad said it was one of the "Crystals of Darkness". Toad said they brought special powers that matched Parax's (but didn't know that they could kill Parax).
The Mario Bros. set out across the Mushroom Galaxy (and several dimensions, thanks to several friends of theirs) to search for more. Parax heard of this, and went into a temporary rivalry with them in an attempt to stop them, knowing they would not be able to control the deadly power of more than one crystal. They engaged in fights, with Parax attempting to steal the crystals they have gathered, but thanks to the crystals, the Mario Bros. were able to hold Parax off. They defeated each other each time, and Parax eventually let them gather several more. When they attempted to merge them together, Parax appeared, and stole the crystals. He told them the power was too great for them, and would corrupt them if they didn't know how to use them. However, two enemies of the Mario Bros. (and their friends), Hellbender and Nature Luigi (created by Youtuber tomato3456), who were eager for revenge, engaged them in a fight.
The two had taken some crystals, and "killed" Parax. He split into two, and went into each of the Mario Brothers, thus giving them the crystal's (and his own) power and the strength to control it. The Mario Brothers quickly summoned their "other selves" from another dimension of the universe they were in (go to Jokester's and tomato's series The Rift), and they defeated HB and Nature Luigi, then sent the Demon and the evil mutated Luigi clone to another dimension. Parax left the Mario Bro.'s bodies, and was revived, then sealed off all ways to the dimension, and later, destroyed it, sending the two evil creatures into the unknown (but somehow, HB got out, though he decided to go to another galaxy for a while, to power himself up).
Parax refused to tell the Mario Bros. how to control the powers and how to use the crystals like he can. Although they constantly asked him, he refused until they gave up.

Delta 284, real name "Parax", was a very skilled fighter in the Star Wars universe. He eventually signed up to join the Republic and became a Commando donning armor similar to the Clone Troopers. He can change the color of his armor from White and Black to Grey and Black to completely Black (mainly used for stealth missions). He carries two pistols and a modified heavy Blaster Rifle for all missions. He also utilizes a jet-pack to help him in his missions, especially in stealth missions, as it helped him get through places more quickly and easily. He was a good friend of bounty hunter Jango Fett. After hearing of Jango's death, he was grieved, but remained on the Republic's side. He was presumed dead many times, but always ended up appearing later on, which surprised most of his allies. Since he can make contact with The Force, he can easily be guided by the spirits of powerful Jedi, known as Force Ghosts. That, combined with his fighting and stealth skills, was how he was able to evade executing Order 66 and escape with the rest of his squad. 284 joined the rebels, and attempted to convince Captain Rex, and several other clones, to join too. They served as double agents for the rebels, and were able to steal the Death Star plans, but, not wanting to blow their cover, gave it to Leia to deliver to Obi Wan Kenobi. He eventually found the corpse of Commander Gree, and took it to a mysterious group of sisters to have him revived. He promised he and Gree would eternally serve them if they revived his friend. After they revived Gree, Parax shot each of them with a tranquilizer dart, and wiped out the last 12 hours of their memory. He convinced Gree to join him and the rebels, and they went to Utapau to see their next target: Cody. Cody, however, remained loyal to the Emperor, and attempted to call his troopers on Gree, 284 and his group known as the Delta Clan, but they were able to kill the troopers. Parax walked up to Cody, and grabbed him by the neck. He told him that he was disappointed, before throwing Cody off a ledge, and he fell off, narrowly escaping death. Parax and his squad left Utapau, and continued to serve the rebellion. Many Imperials were confused when they saw him, as his armor resembled Clone Trooper armor, making them think he was one of them. After the Galactic Civil War, 284 celebrated for a while on Endor, then left, telling everyone that he was going to visit another galaxy. He promised that he would return, and with that, he left.

Things about him in college[]

Some stayed away from him because they thought he was dangerous, and ever since people found out about him killing someone (taking the life of an assassin in college, though that was in self-defense), they were even more nervous about him. However, when those people found out he was Dark Mario and the legendary Parax, not somebody named after him, they began to respect him more. Most people, however, tried to suck up to him, as they wanted to be liked and protected. Parax saw through this, and abandoned them later on.

In the sequel of New Super Mario Bros. Reborn, Parax will guard the Six Rainbow Crystals. Mario, Luigi and Clay must guard them to defeat Mega Bowser in World Bowser's castle.

Parax can create his own dimensions, use the power of all the elements on his side, teleport, shape-shift, fire beams, and many more. He is very agile, and his height and weight tends to change at his will. He can also float in the air and doesn't need to breathe, which is an advantage for him in space and water. He can also absorb things, and each thing he absorbs gives him its power, as he is trying to stay on top of being the most powerful living thing ever. As such, when angered, his offensive power triples, and is a very dangerous opponent in this state. He is very fast, and that combined with his strength made him a favorite in sports during college. He also farts rainbows.

Parax in his clone armor

Parax can scare even his fellow Demons 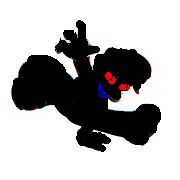 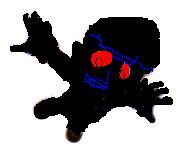