Edit
watch 01:36
We're Getting Mutants in the MCU - The Loop
Do you like this video?
Play Sound

Princess Peach Toadstool (Peach) is the princess/ruler of the Mushroom Kingdom. Peach has servants called Toads and also has an Elder who takes them called Toadsworth. She is the love interest of Mario and Princess Daisy’s best friend. Peach is often "kidnapped" by Lord Bowser , but Mario always saves her.

Princess Peach is a female human with cyan-blue eyes and yellow-blonde hair. She is portrayed to be a capable character as Princess Aurora from Sleeping Beauty, but usually excels in skill level over other characters in most activities.

Princess Peach has a tall height compared to other characters; she is taller than characters like Luigi and Daisy, but she is shorter than characters such as Rosalina and Waluigi. Peach has a similar body type to Daisy's, but her waist is more elongated, becouse of her Lower body fat percentage. wand her frame is unique in comparison, she has large hips. Peach's skin is fair in complexion. Peach is commonly depicted with a puffy smile, and she has round, pink lipstick. Her eyebrows are a dark shade of her blonde (yellow) hair, and they're thin, as well as small. Peach's eyes have multiple thin lashes, and consist of dark black tones.

She has a very thick, flowy, long hairstyle; flipped, fringed bangs with wavy layers are included. Her hair consists of four, small, flipped pieces, which reach above shoulder-length. Peach's bangs are heart-shaped and they have one large part at the top shaping down the center of her forehead. Peach's hairstyle also has long, split, ear-tails that shape her face.

Peach's hair is best described as yellow. Her hair is always a yellow shade and she is well known for her status as a blonde. (Though classical Peach had golden-yellow hair until it was changed in Mario Party 4.) She sometimes wears her hair tied up in a ponytail. Peach was the only princess who ties her hair back, until Rosalina was seen with her hair up in Super Mario: 3D World.

Peach's outfit is a pink dress with white gloves, pink shoes and jewels. She wears a crown with sapphires and rubies and also has matching earrings.

Peach's outfit in Mario's Revenge and Mario's Revenge 2: The Orb of Power is a sparkly pink and white dress, ruby rings in place of gloves, a crown with sapphires and rubies and a sapphire brooch on her dress.

Princess Peach runs the Mushroom Kingdom. In 1985, she was kidnapped by Bowser. Ever since then, she has been getting captured constantly. She is not  so used to Bowser kidnapping her but she doesn't even panic anymore, knowing the Mario Bros. are there to rescue her. But in Toonking2 Comics, it also reveals that she panics so bad she gets fed up with Bowser kidnapping after both Mario and Peach married that she was sworn to kill Bowser for it without him noticing. And it was also explained in the Toonking2 Comics, her birth given name was "Princess Mary Peach Toadstool" (Or "Peach" for short). Even she and Sofia Toadstool, her younger sister, doesn't normally get along very well in those fan comics after she finds out that Bowser was, not really Sofia’s husband, but Sofia's love interest which explains why Bowser Jr. was created by Ludwig.

Conpernica- Living Ancestor (Daughter of Rosalina and the unknown father)

Peach is once again the damsel in distress in Super Mario Moose. In this game, she is kidnapped by Bowser and taken to his new Moose Fortress. Mario then has to save her.

Peach appears in Mario All-Star Sluggers as a team captain. When chosen, her team is called the Peach Princesses. Her stats are:

Her All-Star Moves are:

Peach appears in Super Mario Smash as a playable fighter. Her move set is about the same as Smash 4. Her Standard Special has been changed to Heart Kick but Toad is a playable character.

Peach will appear on Donkey Kong: Revive as a playable character in Levels 1-10 and 16. At first she helps Mario and Luigi, and Yoshi save Pauline from Donkey Kong, but is kidnapped by Bowser later in the game. When she is freed, Moshe helps the gang defeat Bowser in his castle.

Princess Peach was first mentioned in the first episode, Wario's Welcome; however, she didn't make an actual appearence until Super Chef Cook-Off, where she acts as a judge for the cook-off. 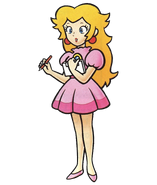 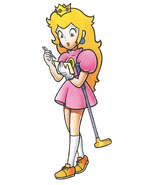 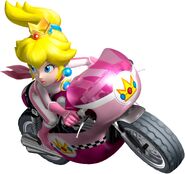 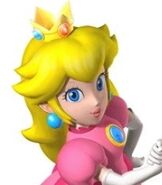 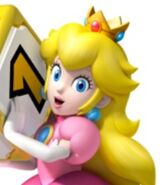 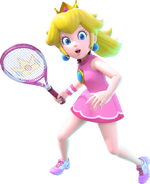 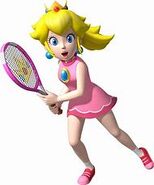 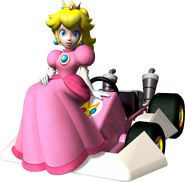 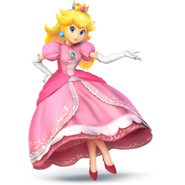 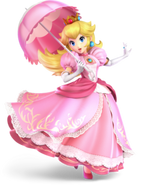 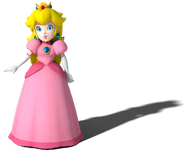 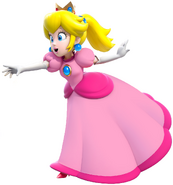 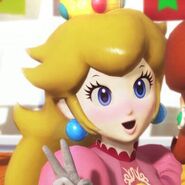 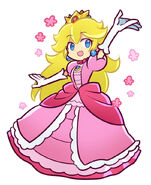 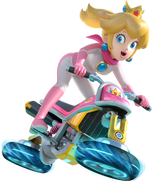 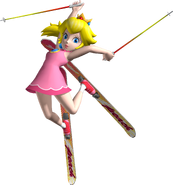 Peach with her parasol 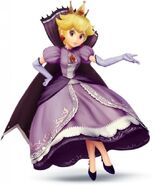 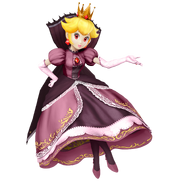